If you need lots of compute power, you’re either already using GPU accelerators or taking a close look at them. And if you’re serious about tapping into the full processing power of the GPU, you need to take a look at the newest PCIe switch offering from One Stop Systems.

Dubbed the ioMillennia, it’s a 3U, PCIe Gen3 switch that can handle sixteen full-size GPU cards. We glimpsed this behemoth when walking the floor at GTC 2013 and were attracted like moths to the 42.3 billion candle-power Luxor Sky Beam. (Or, more accurately, like me to a donut display case.)

One Stop Systems VP of Sales Jim Ison walked us through the box, discussing both technical specs and customer usage. It’s quite an achievement, packing 16 hot and power-hungry GPUs into a cramped 3U space. And it does take a little bit of power to run 16 high-performance GPUs – about 6,000 watts provided by three 3,000-watt hot-swappable power supplies. (One is a redundant backup.)

One of the best things about industry events like GTC 2013 is walking the trade show floor. It gives me a chance to talk to smaller, niche companies who don’t get the media coverage given to the Industry Titans. (Or to Titan the supercomputer, for that matter.)  One floor foray brought me to CreativeC, an HPC consulting and hardware company based in New Mexico. (Here’s a short video of my visit.)

The first thing that caught my eye was their high resolution video wall. With six 46-inch monitors, it was satisfyingly large; and with a full 1080p stereoscopic image, it had breathtaking clarity and image fidelity – at least to my untrained eye. Though the display sported six screens, the system can support up to 16.

Do you have employees who habitually bust up perfectly good tech? These are the people who have a different problem every other week, and they always say, “I don’t know what happened, it just suddenly stopped working. It’s just so weird…” Then they show you a desktop with a motherboard swimming in Coke Classic or a notebook that looks like it took a 10-minute ride in a Home Depot paint shaker.

To solve this problem once and for all, take a page from Hunter S. Thompson who famously said, “When the going gets weird, the weird turn pro.” Turning pro in this case means turning to the folks from General Electric who build ruggedized systems that are tank tough. Literally. These are the systems that go into tanks and other extremely hostile environments (like Dulles International Airport during a big snow delay).

But what does ruggedized mean in the real world? The guys at GE’s booth at GTC 2013 explained it all to me on this video. 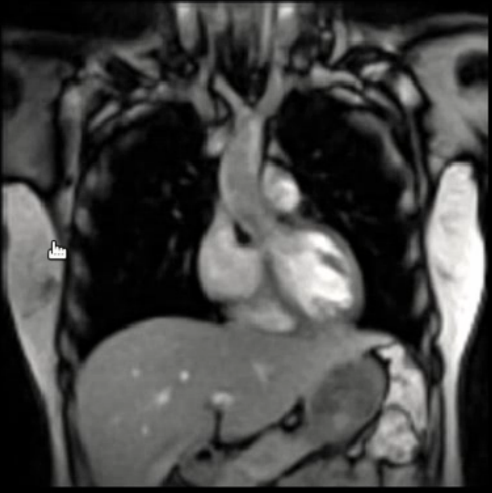 Let’s say you’re at a gathering – maybe a cocktail party or a crowded club – and some buff athlete shows up on crutches. He immediately becomes the center of attention as he recounts the story of his injury: “Dude, it was gnarly… total sick shred. Now I’m waitin’ on the MRI results. The docs think I might never shred again, but I’m stoked to get back out there.”

Is there any way that you, a computer geek, can get the conversational focus back where it belongs –  on you? Sure you can; just say this:  “Really? You’re waiting? They can do MRIs in real time now, and not just an image, but a whole movie. Like better than YouTube, yo… here’s how it works…”

At last week’s GPU Technology Conference in San Jose, researchers from Cal Berkeley and the Max Planck Institute showed how MRI images can now be processed so quickly and accurately that they can be shown as full-motion, real-time videos instead of static, printed output. First, a little background:

We know that all of the objects in the picture below are chairs, right? But show this picture to a computer and see what happens. Getting computers to recognize generic objects is a hugely difficult task that’s complicated by variations of the same object (club chairs vs. office chairs vs. folding chairs) and by other objects in the computer’s field of view that can confuse the machine.

Researchers at iRobot have been working hard on object recognition. iRobot is best known as the company behind the Roomba vacuum cleaner, but they’ve been doing a lot more than just vacc’ing up the dander – these guys are doing serious research and development.

At last week’s GPU Technology Conference, the team from iRobot revealed that they’ve developed the first real-time generic object recognition algorithm. It’s based on the Deformable Part Model (DPM), which is based on the idea that objects are made of parts, and the way those parts are configured in relation to one another is what defines a person from a chair or a car from a boat.

Over the last few years, we’ve seen a steadily growing buzz surrounding the use of ARM chips in PCs, servers, and supercomputers. Here at GTC 2013, that buzz is even more pronounced due to NVIDIA’s upcoming Project Denver, and advances in their GPU technology that result in even less dependency on having a fast and powerful (read: Xeon) processor feeding the GPU number-crunching beasts. Our pal Rik Myslewski penned a great article on GTC 2013 ARM chatter here.

While most everyone has been debating and speculating about what it would be like to combine ARM processors and GPU accelerators, one organization has put together some hardware in order to separate the theoretical from the real. The Barcelona Supercomputer Center (from the Barcelona in Spain, not the other one) is building clusters to explore the potential advantages that might arise from combining low power ARM processors with fast number-crunching GPUs.

Accurately modeling and rendering the ocean is highly intense from a computational perspective – but it’s considerably harder to accurately portray an artificial simulation of the human face, according to NVIDIA CEO Jen-Hsun Huang in his opening keynote address at the GTC 2013 conference in San Jose.

Human faces contain a subtlety that’s incredibly difficult to capture. Consider the wide range of skin textures, pore sizes, bumps, humps, colors, and other features that all have to interact in a completely natural manner in order for the illusion to hold. And that’s before we even think about modeling beards, goatees, and the like.

Anyone attempting to build a believable human facsimile also has to beware of the “uncanny valley.” This is a school of thought that says human copies which are almost – but not quite – perfectly human can cause big-time revulsion in us real humans.

(I would submit a picture of Carrot Top as proof positive that this is true. I’m sure you can come up with your own examples of real people who have gone over the uncanny cliff into the valley of revulsion. Spend a couple of hours on it today; it’s important, and sort of scientific too.)

NVIDIA CEO Jen-Hsun Huang’s GTC 2013 keynote was a typical whirlwind tour (with real wind, but that’s a different article) through all the various GPU-related worlds that NVIDIA is touching these days. These addresses are usually chock-full of demonstrations showing where we are in terms of state-of-the-art graphics, scientific and technical computing, entertainment, and now: finding dresses.

In this demonstration, Jen Hsun leafed through the latest edition of InStyle magazine. While the models are svelte (or starved), the magazine definitely isn’t, weighing in with 594 pages of ads. A dress from one of those ads was chosen, its picture was taken, and it was sent off for image matching. What came back was a set of likely matches that the image-matching tool found via eBay. (This can be seen in the semi-blurry picture taken from my third-row perch.)

“Time? They ain’t making any more of it, so you gotta get in, and get out, or you’ll get your f**king face ripped off…” screamed an old Chicago Merc floor trader at my grad school class during a field trip. I nodded, like the rest of the class, figuring he knew what he was talking about and also not wanting to further provoke this human ball of fury.

But he was wrong. The kind folks who make their living providing services to financial types have been manufacturing time for decades now. And they’ve hit a new milestone.

McKay Brothers just announced that their new microwave-based network can roundtrip a signal between suburban Chicago and New Jersey in only 8.23 milliseconds. The previous record, set by Spread Networks back in October, was an utterly lame 12.98ms over a fiber optic connection.

Translating this to human terms, traveling the 816 miles between Aurora, IL and Newark, NJ in 8.23ms is equivalent to speeding along at a little over 358 million miles per hour. If you aren’t in a big hurry, you could use the Spread Networks fiber and travel at a leisurely 227 million mph.